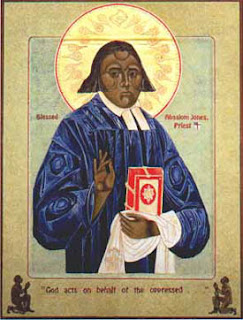 Absalom Jones (1746 – February 13, 1818), was an African-American abolitionist and clergyman. He was the first African-American priest in the Episcopal Church of the United States and founded a black congregation. He is listed on the Episcopal calendar of saints and blessed under the date of his decease, February 13, in the 1979 Book of Common Prayer as “Absalom Jones, Priest, 1818”.

Jones was born into slavery in Delaware in 1746. When he was sixteen, he was sold to a storeowner inPhiladelphia, Pennsylvania. While still a slave of Mr. Wynkoop, he married Mary King, another slave, on January 4, 1770. By 1778 he had purchased his wife’s freedom so that their children would be free, and in another seven years he was able to purchase his own.[1]

Jones became a lay minister for black members in a Methodist church. Together with Richard Allen, he was one of the first African Americans licensed to preach by the Methodist Church.

1787 Jones and Allen, together with other black members, left St. George’s Methodist Church, tired of being segregated to a gallery and given second-class status. They founded the Free African Society (FAS), at first a non-denominational mutual aid society, to help newly freed slaves in Philadelphia. They separated over religious differences but remained lifelong friends and collaborators. At the beginning of 1791, Jones started holding religious services at FAS. This became the core of his congregation for a new church.[2]

Wanting to establish a black congregation independent of white control, Jones in 1792 founded the congregation of the African Church in Philadelphia. It petitioned to become an Episcopal parish. The church opened its doors on July 17, 1794, as the African Episcopal Church of St. Thomas, the first black church in Philadelphia.[3] Jones was ordained as a deacon in 1795 and as a priest in 1804, the first African-American priest in the Episcopal Church.[4] He was a well-known orator and helped establish the tradition of New Year’s anti-slavery sermons.

A month after they opened, the Founders and Trustees published “The Causes and Motives for Establishing St. Thomas’s African Church of Philadelphia,” clearly stating their intent

“to arise out of the dust and shake ourselves, and throw off that servile fear, that the habit of oppression and bondage trained us up in.”

Jones was also part of the first group of African Americans to petition the U.S. Congress. Their petition related to the 1793 Fugitive Slave Act. They criticized it for encouraging cruelty and brutality, and noted the danger which free blacks risked of being kidnapped and sold into slavery. While U.S. Representative George Thatcher of Massachusetts responded with the desire to amend the Fugitive Slave Act, other representatives’ resistance to changing the law forced his proposal to fail.

On a parallel path, Allen founded the African Methodist Episcopal Church (AME) within the Methodist tradition. He and his followers converted a building and opened on July 29, 1794 as Bethel AME Church. He was ordained in 1799 by Bishop Francis Asbury as the first black minister in the Methodist Church. In 1816, Allen gathered other black congregations to create a new and fully independent denomination, the African Methodist Episcopal Church. In 1816, he was elected its first bishop.